I’m always bugging Robert to try to earn more money on TeachersPayTeachers, primarily by making his products a little “cuter,” as well as just making more stuff. I know he loves to cook, and my mom thinks he’s quite handy in the kitchen, but this OBSESSION WITH LAMB CHOPS HAS GOT TO STOP!

I’ve asked Robert about how much money he makes each month on TeachersPayTeachers, and the only concrete response I’ve gotten is reference to an old Jewish joke about an old man who gets mowed down by a car and, as he is lifted into the ambulance, is asked by the EMT, “sir, are you comfortable?” The man replies, “Comfortable, eh, I make a living.”

I don’t understand this joke. In fact, I find it kind of offensive: this old man gets run down in the street, and he’s probably going to die and all he could do is make this comment? If you can explain why this is funny, please tell me.

Robert wouldn’t tell me the exact state of his financial activity on TpT, but he did offer me this: a graph showing what the sales during one month looked like. Here it is:

The question is, did Robert have a lousy month on TpT, a good month on TpT or a great month on TpT? I don’t know what to make of it: it looks like he had some really good days and some really lousy days. Robert did reveal that this was the best month he’s ever had, but he only started taking TpT seriously during last summer, and since he’s so busy doing things like cooking lamb chops, writing blog posts that decry charter schools, the common core AND Go Math!, while also running his various math programs around the city (not to mention playing that horrible concertina), I guess he’s pretty happy where he is, wherever that happens to be, because he won’t tell me how much money that is!

What Robert will say is that he likes selling on TpT because the sales graphs are very interesting. When he looks at the graph above, he sees something called “stochastic variability,” which means that his sales are very unpredictable. Some days he does really well, and other days it seem like his sales collapse completely. He says that one of the findings he find most interesting is that instead of having steady sales over the course of the month, there are “highs” followed by “lows” and that the highest highs are also followed by the lowest lows. I don’t know if that’s good or bad, and while other people might find this vexing, Robert assured me that this is pretty much how life works. In fact, if the graph showed his sales going up steadily, he would be very worried.

This is known as the “Bernie Madoff property” – you probably all know how Bernard Madoff stole billions of dollars from thousands of clients by doing something very simple (and statistically impossible, according to Robert, who seems to know these things): he showed that their investments were growing at a very steady rate of about 8% each year. This doesn’t seem like a lot, but when you compare to the 1 – 2% that most banks offer, it appears to be astonishing. Of course, it was astonishing, because it wasn’t real. See his graph below? 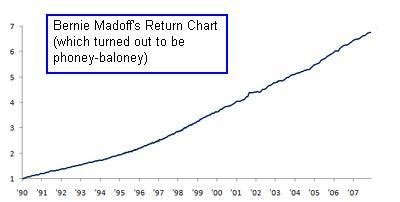 Basically, if it looks too good to be true, it is: if you’re hoping your sales go up at a steady rate each day, or even stay steady for more than a day, you’re definitely deluding yourself. The world just doesn’t work that way, says Robert (and a whole lot of statisticians – actually, every statistician who is really a statistician.)

I asked Robert if he get worried when he has “bad days” on TpT. “That’s a good question,” he told me, “which reminds me of another joke,” and believe me, I’m not going to repeat this one.

Good luck to all of you and go with the stochastic flow.

I was eating dinner with Robert & my mom, and they were  talking about a new project he was working on, which was advising a school in the Bronx on their math program.

“So, Robert, what does it feel like to be an entrepreneur?” I asked.

“An entrepreneur: you know, one of those people who sets up businesses and they’re really successful and independent and make lots of money?”

“Yes, only all but three of those things you named are true of me: I’m not all that successful, I am constantly at the beck and call of whomever I’m working for, and do you see a Gulfstream anywhere on this block waiting to jet me off to Tahiti?”

“Yeah, but you’ll make it someday, don’t you think?”

“Um, Emily, I don’t know if you’ve noticed, but I’m 54, count ’em, 54 years old. Unless there is a “genius grant” for people whose primary accomplishment is knowing the difference between a vinculum and a vowel, I doubt I’m going to be considered an entrepreneur anytime soon.”

That took care of that. But I have to say, I do admire what Robert does, because I think it’s somewhat important and he’s into it, and hey, if your goal is to do more than build some sort of app that allows people to crush candy or fling birds at pigs, then maybe you’re not really an entrepreneur. Or maybe he is, but doesn’t want to admit it. You’ll never confuse Robert for this guy; for one thing, this guy’s got much better hair!

What is an entrepreneur, anyway? I hear about them all the time: they’re the ones that came up with the big idea, developed it into something popular and then sold it for a gazillion dollars, like Instagram or WhatsApp. And then I look at Robert: he’s got this traveling math exhibit that goes around to schools and brings families together doing really neat math. He also does these workshops with snarky names like, “Fractions: You’re Teaching It Wrong.”  And then there’s this “store” he set up on TeachersPayTeachers where he sells the materials he develops for his teachers and students. And, if that’s not enough, he’s got this idea for computer chips that you can implant in the brain and change people’s personalities for the better – seriously, he actually built a website for it! Do I have to go on?

Well, you decide: Robert – entrepreneur or just some strange man making a life in Brooklyn? I’ll let you figure it out, because I sure can’t.