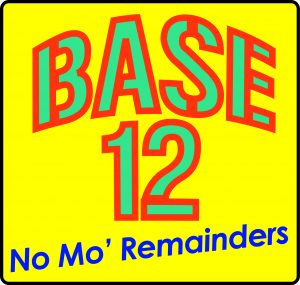 Readers, do you live in fear of teaching division to your students? Do you stay awake at night laboring over unique division examples that come out evenly? Do you squirm every time a student looks up and says, “but blach doesn’t go into blah-blah-blah?” Do you drift off into la-la-land whenever a student complains, “hey, there’s a remainder here; what should I do with it?”

If this bothers you, then consider the options of using the duodecimal system, aka “base 12.” In the base 12 number system, you have many more options to give division problems that are “remainder free!”  Yes, now you can strike one less issue off your list: fewer remainders means neater division problems, no complaints about extra numbers and, most importantly, fewer decision to make! With the duodecimal system, you can divide by 1, 2, 3, 4, 6, and 12 without worrying about pesky remainders! Try that with the crummy old decimal system: divide by 3, 4, 6, 7, 8, and 9 and what do you end up with? REMAINDERS! Urgh!

Okay, the world will not be switching away from the base 10 system anytime soon, and remainders are going to be a fact of life well into our collective future. So the question is this: what should you tell your students to do with the remainders that inevitably come from dividing?

a) Do the problem over; all division problems in school come out evenly.

b) Write it as a whole number, and let someone else deal with it.

c) Leave it as a fraction, whatever that is.

d) Leave it as a decimal, so long as it comes out evenly. If not, refer to choice “a.”

e) Round up to the nearest whole number.

f) Round down to the nearest whole number.

g) All of the above.

h) None of the above.

Well, if you know my style of writing, you know the answer is “j,” but given how many teachers treat math as a set of “rules” to be obeyed,  it is most likely that a student will choose a, b, c, d, e and/or f. Harumph….

The simple fact is this: most division problems do not come out evenly, and why we persist in giving students a steady diet of problems that leave no remainders is beyond my comprehension. The presence of remainders should not be seen as an “oddity” when dividing; rather, we should teach it as one of the essential properties of how division works: most numbers do not go into other numbers evenly, or even once (the “bigger into smaller” issue, which I’ll cover in another rant…), and yet we persist in giving students a steady diet of division situations which work out evenly. Therefore, if we give word problems where remainders are the exception, rather than the rule, our students are not going to have strategies for dealing with remainders. 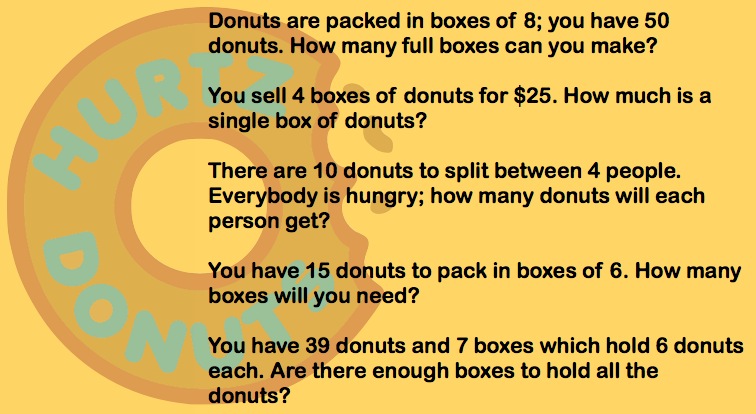 In the first problem, the remainder gets discarded, while in the second problem, the remainder should be written as a decimal. The third problem is best left as a fraction, the fourth problem needs to be rounded up and the fourth problem doesn’t even need division at all: just multiply 7 boxes times 6 donuts per box and you end up with 42, which is larger than 39. Do I have to do everything for you?

Teachers of mathematics, we have to wise up! Give your students lots of word problems where the divisor doesn’t gozinta the dividend evenly, and have them interpret the meaning of the remainder. It’s either that, or push for decimal reform and invest in base 12 calculators!

This post has been brought to you by the hardest division assessment you could ever give to a student who believes “I know everything there is to know about division.” 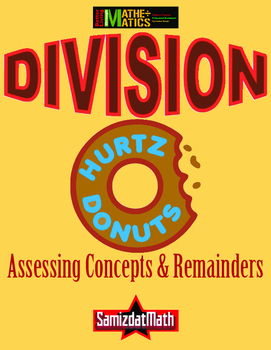 Hand your students a calculator and watch their brains sizzle! Comes complete with teaching tips, answer key and suggestions for activities that you can do in the classroom.