Robert has a new Pinterest board called Fraction Teaching Mistakes where be trolls through the wide world of what passes for “good” mathematics materials and comments on the inherent flaws in one activity or another. Some he objects to because they hide the underlying beauty and logic of mathematics through “magical thinking” (for example, “butterfly methods” for comparing fractions), while at other times he finds very rigid representations (“will we ever see the end of fractions represented as pies?”  he often laments…), not to mention information that is just plain wrong (2/5 x 1/3 = 11/15?) One of the things that really irks Robert are math activities that focus too much attention on peripheral activities, like coloring, cutting and pasting. These projects look very pretty when completed, but unless the teacher’s specific goal is to create a work of art, they are pretty much a waste of time.

At the same time, it could be useful to take a break from using pencils and screens to do math, and cutting and pasting are good for motor skill development, so why not let the kids have a change of pace? How can we design a cut ‘n paste activity that makes the most of a student’s limited time in math class, without unduly devoting the majority of time on scissors and glue? How can we maximize the amount of thinking that will take place?

One thing that has to be considered is on designing the “cut outs” so that it can be cut out efficiently and with a minimum of wasted paper (which is why Robert objects to the use of most “cutesy” clip art that routinely gets inserted into many materials.) Check out the “cut outs” used in a 3rd grade activity below:

There are three reasons to object to this: the first is that it is difficult for young children to cut out, what with the individual pieces and rounded corners. The second is that there is a lot of white space between the different “cut outs,” which mean that it is a waste of paper. Third, since there are more symbols than actual problems, the students will be cutting out materials that are unnecessary. While the activity may be useful, this is seriously bad design. After making all the cuts (there are 13 separate pieces, at 4 cuts per piece, which is 52 different cuts, not to mention the time rounding out the corners) how much time do you think will be left to “do math?”

Robert approached the “cut ‘n paste” activity and redefined it as a design challenge, seeking to have the most “work” with a minimum of cutting. Here’s what he came up with: 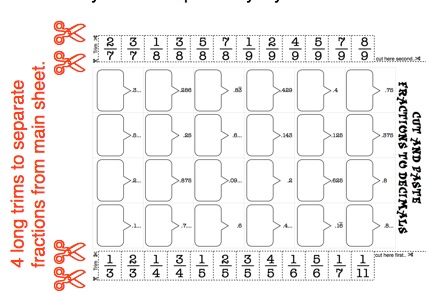 What you’ll notice is that there are no rounded corners to trim, and that almost every piece is adjacent to another, so that one cut actually trims 2 separate pieces. The 24 pieces can be separated from the main sheet with two easy straight cuts, and then laid on top of one another two at a time to minimize cutting. The fifth graders who did this activity typically were ready to place their pieces in fewer than a dozen “cuts,” which look about 3 – 5 minutes. In addition, there was a minimum of paper waste, as the activity only left behind two small squares of paper and 2 thin strips.

Since Robert is a calculating guy, he figured out that there was less than 5% wasted paper, and 90% less cutting than other activities of this type. With less time on cutting, the students had much more time to think about much more important things, like “if 1/7 is .142857 on the calculator, and it’s rounded off to .142, why isn’t there one on the sheet?” 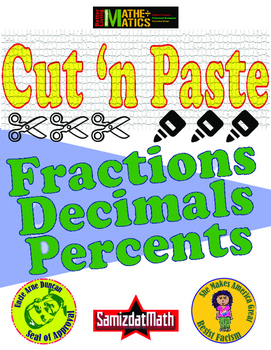