I started teaching waaaay back in 19, wait for it, 84. I was a much younger man back then, and while I thought it seemed like a good way to earn a living, I had no idea the actual “craft” would engage me for more than three decades. Back then, I honestly believed that it was all about teaching a few skills and then testing to determine how much my students remembered. In that sense, I believed that teaching was like running a series of controlled experiments: teach, test, teach, test….

As I struggled through the first year, the head of school, with whom I found myself at odds with, offered me a book called “The Art of Teaching” by Gilbert Highet, which actually proved to be my undoing when I attempted to implement the ideas expressed. I had actually read another book about teaching when I was 14 years old, 36 Children by the wonderful Herbert Kohl, which got me thinking about teaching as a force for social justice. My first year was rough, but it was then during that year that I understood, I was born to teach. I also learned that the idea of “teach, test, teach” just was not the essence of the profession. There was much, much more to learn and do…. 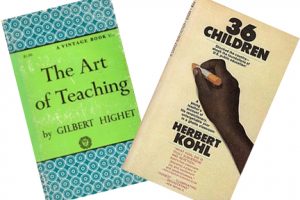 Two definitive books on teaching; both were “borrowed” and never returned to their owners.

Flash forward 32 years, and here I am, back where I started: a new year, new thoughts about teaching, and new things to do. I stopped in to visit the lovely teachers who rule the 2nd grade (or, what we call the “7/8s”) and what did I find but a lovely activity based on Eric Carle’s beautiful story, Rooster’s Off To See The World. As with all of Carle’s books, the illustrations are engaging, and the story works on many levels – it is nominally about a group of animals out for adventure, who ultimately opt for the “creature comforts” of home. At the same time, it is a counting book, designed to introduce the young to numbers and patterns. The teachers had posed a problem to the students: if there are 14 animals off to see the world, how many legs would they have? This is not an easy question, because some have 2 legs while others have 4, and there are 14 numbers to keep track off, which is no easy task for a child (or even an adult.)

I looked at the book very carefully and decided for myself, well, this is a wonderful book and the idea of keeping track of legs on animals is a provocative one for young children to do. But I also thought that turning the tables on the activity, that is, giving young children the chance to ask questions of one another, would be a fun and engaging way to get them to interact with one another.

There was just one problem with this plan: there is a great deal of variety in the legibility and spelling of 2nd grade children, as well as their motor skills in writing out questions. I wanted them to create problems quickly, so that they could focus on the mathematics, rather than letter formation, sentence structure, grammar and punctuation, to name a few elements of literacy. I also didn’t want to get into trouble with the publishers of Mr. Carle’s book due to copyright infringement, which meant staying away from his imagery and characters.

Instead of rooster, cat, frogs and turtles, I decided to simplify the activity by using only 3 animals. At the same time, I wanted to vary the number of legs on the animals, that way I could have more combinations: so I used an ostrich (2 legs), wombat (4 legs) and ants (6 legs.) I also think that ostriches, wombats and ants are interesting animals, don’t you?

With those decisions made, I designed three different stamps that students would cut out to make their questions: instead of writing out long sentences with stories, I envisioned them cutting and pasting combinations of the animals, with the simple question “How many legs?” printed underneath. 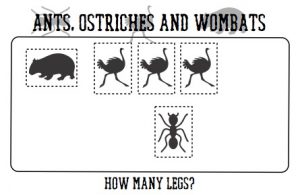 Well, this seemed like a promising start, but why stop at just addition? Since subtraction is also a good topic, why not create a simple problem that involves comparing the number of legs? 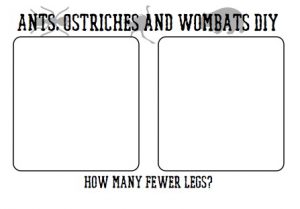 and while we’re at it, why not add something even more interesting and open ended? 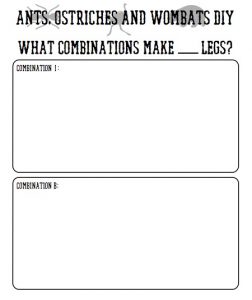 Oh, this is muy muy fun, and if you don’t agree, well, you just don’t know what the definition of fun happens to be….

To add finishing touches to this activity, I thought about what could be done to get kids to think more carefully about how they create their problem, as well as offering a means to initiate discussion of their solutions. Which is why I created a separate sheet where they could make an answer key for the question they asked, as well as offer a “clue” about how to approach solving the problem: 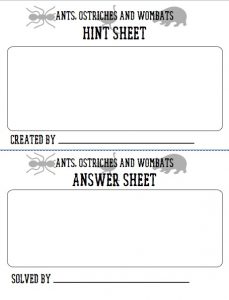 Isn’t this beautiful? Well, that’s not all, because I added one more innovation which I think I may use on every single activity I make in the future:

Do you get what I’m attempting to do here? Instead of putting the name of the students at the top of the paper, which is what you do when you start something very monotonous (like take a test or apply for a learner’s permit at the DMV), I thought it would be much more important that a student “sign off” on their work after it has been created. Much like no artist every signs a work before creating a sculpture, painting or dance piece, a student should not sign off on a piece of mathematical thinking until after it has been completed. This allows the student to feel a sense of process and completion to what they have done. I feel very inspired by this tiny little change, and I hope you’ll use it as well.

The scariest thing I can imagine about being in my profession is doing the same thing year after year. Working with a staff of vibrant educators means that I always have the opportunity to do more and more, as well as refine what I’ve already done, AND share it with the rest of you. At 32 years in, I’m still feeling young… 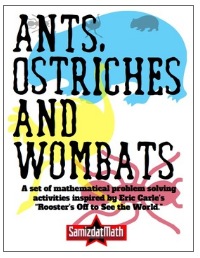