As mentioned in my previous post, Robert subscribes to a homegrown philosophy of “good” math teaching that relies on some simple principles. His first one, The Vidal Sassoon Principle, focuses on making teachers look good through encouragement and “having their back” if something they try doesn’t go as planned. Today we’ll look at another part of Robert’s coaching philosophy, which he calls “The Sy Syms Principle.”

What did this schmata salesman have to say about math coaching?

Sy Syms, if you were growing up in the New York area in the 70’s, owned a chain of men’s clothing stores called, yes, “Syms.” While Robert never had the opportunity to shop at Syms (he was more of a “Gap” sort of guy, before they went all khaki), he never forgot the tagline on Sy’s commercials: “An educated consumer is our best customer.” This can be reconfigured in several ways to fit what happens in the classroom, including “a well informed educator is our best teacher…..”

So what does this have to do with Singapore Math? First, many schools adopt this curriculum, or its bastardized variants, with the belief that if they slavishly “teach the book,” including the “bar model,” their students will generate the same math scores that puts Singapore at the top of all international comparisons. Sure, this is an admirable goal, but any school that adopts this curriculum based solely on international scores is going to be very, very disappointed in the results. 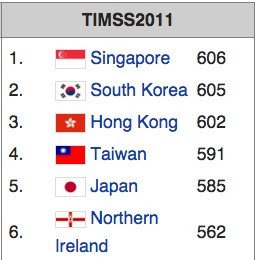 If these numbers were “true,” then monkeys would come flying out of my butt….

What the sales people for these curricula are loath to reveal is that Singapore is a very, very different country than the USA, and that unless you are prepared to adopt every single feature of that country’s educational system, you’re not going to get anywhere near the results found in their math program.

There are many features that skew math scores in favor of Singapore, which includes year round education (students in Singapore go to school in July and August, believe it or not….) and a very low child poverty rate (8.2% versus 22% in the United States), both of which alone would account for much of the disparity, setting aside curriculum.

But there are two nefarious features of education in Singapore that we might want to consider before admiring it as an educational leader. Unlike the US, Singapore only provides limited educational services for students with physical or intellectual impairments, and exempts them from testing (which includes international comparisons.)

But the chief reason for Singapore’s educational success can be placed on the omnipresence of Singapore’s “cram schools,” which are attended by 97% of the school-aged population. These educational centers, which have been termed the “tuition industrial complex,” are highly profitable enterprises which students attend in the evenings and on weekends. In fact, if you add up the low rate of child poverty in Singapore, the fact that schooling is year round (and omits those with disabilities) and the influence of “cram schools,” the actual role of using a Singapore Math curriculum is negligible. Yet, schools are foolishly spending lots of money on materials and training in the expectation that their scores will rise to the top as well. Q: What do you think these students in Singapore are doing after school and on weekends? A: Going to more math classes!

So what does this all have to do with Sy Syms? As Robert is fond of saying, “an informed math teacher is an effective math teacher,” which means that the next time a teacher is asked why the school does not use Singapore Math, he/she has an answer that is both wise and based on actual information, instead of random test numbers.

This post has been brought to you by SamizdatMath, where teachers can learn about and implement good old American methods for effective math teaching in their classroom, including this: 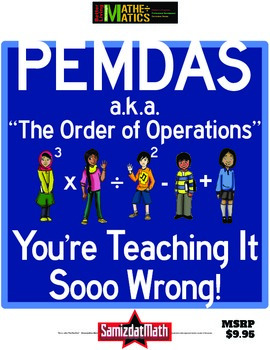