I work with a student who attends a school for children with special needs. He’s a very nice kid who is very eager to do well in math, even though it presents many challenges to him. His parents decided to meet with the math teacher with whom he would be working this year, and she mentioned that the students would be doing a unit on problem solving focusing on the “key words” approach to answering word problems.

I was shocked. No, strike that: . I was astonished! I haven’t heard of anybody using this approach for as long as I’ve been working with teachers (which goes back to the previous century), and I had thought that after it had been died a complete death after being thoroughly discredited. How was it possible that this approach had risen to mis-educate a  new generation of students?

One of the “keyword” anchor charts that lurk on Pinterest

I’ll show with just how bad an idea it is to teach problem solving with keywords by using a single example: I had 5 apples in my basket on Monday. On Tuesday I increased the amount of apples so now I have 7 altogether. How many apples did I add on Tuesday?

If the student had been the victim of a teacher who used the “key word” approach, then by following these directions, he would have been absolutely correct to add 5 and 7 to get 12 apples. After all, the “key word” altogether is used in the question, as well as increased and added. The question does not contain any of the subtraction keywords, which includes difference, take away, left, still, minus and take away.

Some teachers might argue that this is a “gotcha” question, but this is not the case. In fact, it is a question that I would hope a 3rd grader who has a grade-level understanding of English would be able to turn into an equation and solve. The “key word” technique is a kind of hunt & peck approach to reading and interpreting word problems, and it results in students performing the wrong operation on anything but the most obvious problems. Am I crazy, or is this a seriously bad way to teach problem solving?

So what should we be doing in the classroom instead of teaching “key words?” The best approach is to do things that actually require thinking, like having the students build models that will help them solve the problem. Mathematicians do this all the time; why not have students? These models could be physical or written, but regardless, they are models and they help students actually “think” about the meaning of a problem. 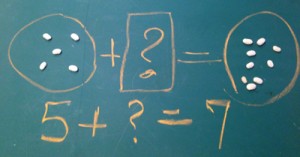 Both models to the right can be used to solve the problem described above. The top one uses a “bar model” which is attributed to the Singapore Math program, but was actually developed by W.W. Sawyer over a half-century ago. By comparing the part (the 5 apples I had on Monday) with the whole (the 7 apples I now have on Tuesday), I understand that I am “adding” on to 5 until I get to 7.

The second model does essentially the same thing, but uses manipulatives: the child “acts out” the timeline of the problem by putting 5 beans in the first circle, showing that some apples are being added, and the result is 7.

Please, please don’t download or hang this chart in your classroom.

I don’t know who came up with the idea for using “key words” when teaching children about problem solving. It’s a seriously bad idea that somehow made its into the everyday practice of misguided teachers around everywhere. It substitutes comprehension for shortcuts, and disengages children from the actual practice of what mathematical thinking look like. I can guarantee you that there is not a single economist, biologist, chemist, statistician or anybody working in the field of mathematics who solves a problem using this method. Why would we teach it to our students?

Note: this rant has been brought to you by none other than Robert M. Berkman, proprietor of the SamizdatMath curriculum collective. If you are interested in including visual approaches to problem solving, try out this set of algebra problems which promote algebraic reasoning without the use of nonsensical “key words!” 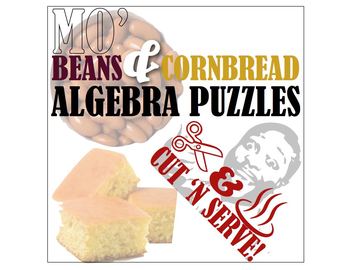